This week saw the release of the fourth coin in the Deadly and Dangerous series, the 2009 $1 Saltwater Crocodile 1oz Silver Proof.

Found in suitable habitats throughout Southeast Asia and Northern Australia, the Saltwater Crocodile is the largest of all living reptiles. Known to grow over 6 meters long and weigh over 1,500kgs, these enormous reptiles can take on prey as large as a 1 tonne Water Buffalo. Salt Water Crocs are opportunistic predators whom often lie in wait for their victims just below the surface of the water, and without warning, quickly strike. They will often kill their prey with one snap of their powerful jaws. If not, they will drown it with a "death roll", dragging it down under the surface of the water. 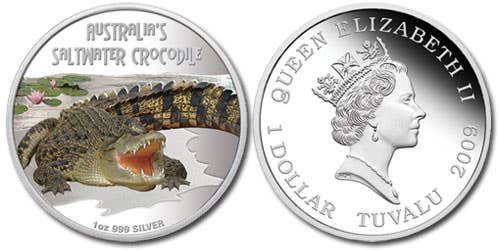 The latest coin in the infamous Deadly and Dangerous series honors the Saltwater Croc by delivering a vivid design upon its 40.6mm flan. Whilst effectively capturing the sheer strength and power of such a Deadly and Dangerous creature, the coin itself displays a stunning example of the peerless full-color minting techniques The Perth-Mint has become so famous for. 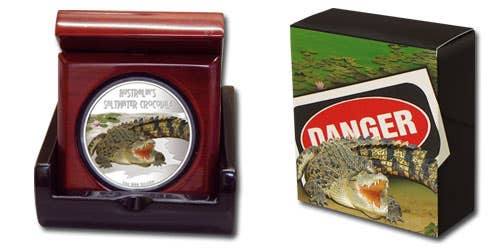