Downies is proud to congratulate Ken Downie for receiving the Lord Mayor’s Commendation this year! Southbank Local News has written a lovely article on the event.

Day one of the 2017 International Stamp Exhibition proved to be one of the busiest mornings I’ve seen at a trade show in quite some time. From the moment, the doors opened hordes of enthusiasts flocked to the Australia Post pop up shop to secure their Day One souvenir products.

Once everyone began to settle into the show we found that quite a few attendees were very keen to have their collections appraised and some were quite surprised with just how much their little old bread tin filled with old coins was truly worth! 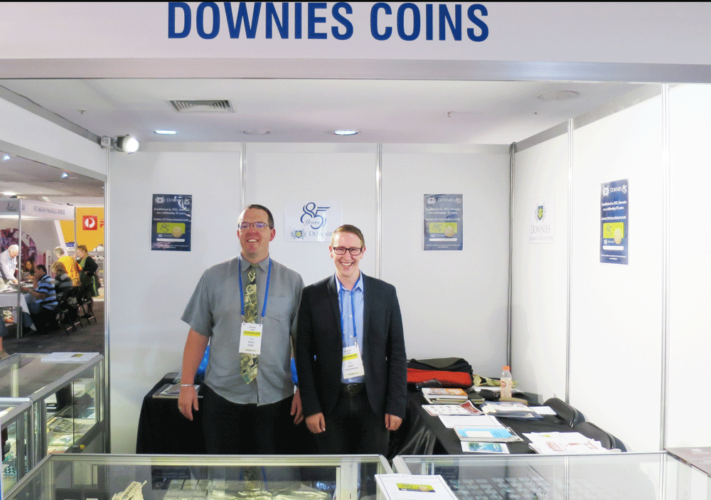 Downies Numismatist, Steve Kirby was run off his feet with a fantastic array of old and new coins being consigned for our upcoming July Auction. 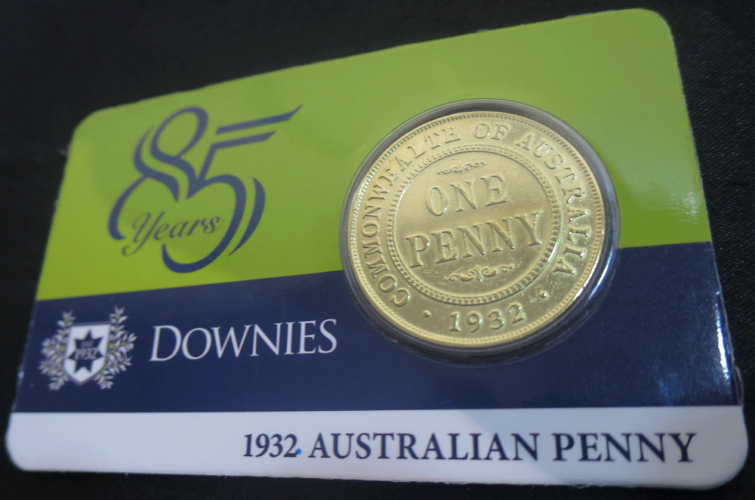 The Gilded 1932 Penny which celebrates the 85th Anniversary of Downies Coins was another unexpected pleasant surprise for our customers who made a purchase today. The only way to secure one of these beautiful coins is by making a purchase at one of the upcoming trade shows. These coins will not be available anywhere else so make sure you drop in and say hello!

Posted in News and Stamps 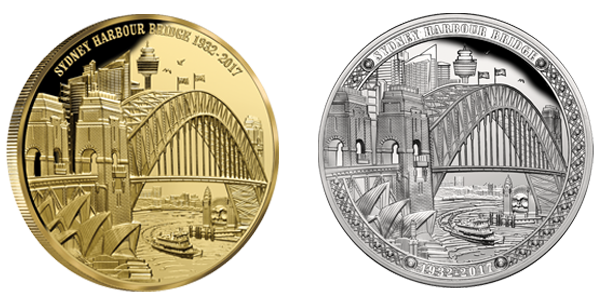 To know more or to place an order please CLICK HERE.

Downies Southgate Melbourne Store has just received a new and wide range of Ancient Greek and Roman Coin and Historical Books in-store - all at competitive prices! The range of these books covers the entire period of Ancient Greek and Roman History from Alexander the Great through to the last emperors of the Roman Empire. These books are written by well-known world experts in the field including:

To compliment the books, Downies Southgate has a good range of Ancient Greek and Roman Coins in stock, and is currently giving customers a 10% discount on each coin purchased. 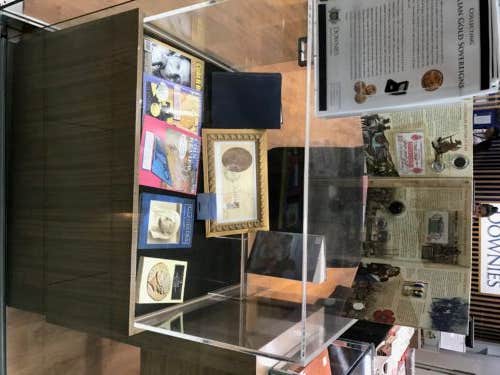 Whether you are a beginner or an advanced collector, Downies Southgate can help you with building up your interest, enjoyment and knowledge with Ancient Greek and Roman Books in-store now.

Presented by the Australasian Numismatics Dealers Association (ANDA), and sure to attract dealers, collectors and investors from right across Australia, the Perth Money Expo will be held at the Domain Stadium, Subiaco on February 11 & 12.

Highlighted by the presence of the Perth Mint, along with 15+ dealers, large crowds are expected to attend the Perth Money Expo this year. Downies will be at Western Australia’s premier numismatic festival, of course, with our Numismatist Steve Kirby. 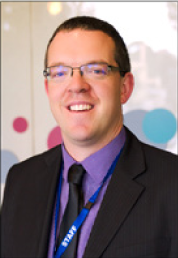 Steve will be available at the Downies Stand from 10am to the end of each day.

Assisting with your personal coin and banknote needs, as well as helping with all rarities enquiries, Steve’s services also include:

Please call us on (03) 9686 8411 or email skirby@downies.com to arrange an appointment while he is visiting WA and the Money Expo – but hurry!

There are a limited number of appointments available.

We hope to see you at the Perth Money Expo!

Founded by Phil Downie in 1932, during the depths of the Great Depression, Downies celebrates its 85th anniversary in 2017. Here are just a few of the key highlights on our long journey to become the undisputed leader in Australian coins and banknotes.

A young man with a big dream, 16-year-old Phil Downie established the Palmerston North Stamp Company in New Zealand. Within a short space of time, the business grew enormously, and was helping leading stamp collectors across the world achieve their goals.

After moving to Australia in 1938, Phil opened the Myer Philatelic Bureau in 1939. He and his wife Zita ran the bureau at the famed Myer store in Bourke Street, Melbourne. When Phil stepped up to serve the nation in the Australian Army during the Second World War, Zita did what many women of the era had to do – she stepped out of the shadows and ran the bureau single-handedly.

With a strong foundation having thus been established, Phil and Zita’s fledging philatelic business quickly grew to become an Australian industry leader. From stamps, the Downies business eventually expanded into all fields of collectables, including coins and banknotes.

1963 – An auction venture
The 1960s was a time bristling with opportunities, and, in 1963, Phil took the bull by the horns and launched his auction business. It proved to be an unmitigated success. The first public sale of stamps and coins was held at Amethyst Hall in Melbourne, and attracted around fifty bidders. From these humble beginnings, Phil’s auction venture expanded rapidly.

Phil’s son, Ken joined the company in 1977. Ken’s vision and passion for numismatics created a greater focus on coins and banknotes – both new and old – and the company moved from strength to strength.

In 1984, Ken introduced the journal Spotlight on Numismatics. In 1990, this became Money, a magazine which is still in print today. For nearly four decades, Downies has provided a full mailorder service through a variety of general and specialist publications, bringing its clients a wide array of products. Today, customers are able to place their order by phone, fax, mail and email.

Downies launched retail outlets in Sydney and Melbourne in 1991 and 1994 respectively. This enabled the company to bring an extensive array of items to collectors, and helped to share Downies love of coins with the widest possible audience.

Downies ‘personal touch’ also extends to the major Money Expo coin & banknote shows held across Australia. Ken often attends, and continues to share his love of coins and banknotes with numismatic enthusiasts, both young and old.

In March 1998, Downies launched its website, www.downies.com. Helping to pioneer online services for collectors, downies.com features a vast array of exciting numismatic and other material, including all the latest releases from Australia and around the globe.

A major highlight in the company’s long history, Downies Australian Coin Auctions was chosen to host the Auction of the Gold Coins of the Reserve Bank of Australia – arguably the most exciting, most prestigious sale in the history of Australian numismatics. Downies was selected in 2015 to disperse the Royal Australian Mint’s Master Collection – an assemblage of utterly unique ‘production standard master’ coins, used to ensure the highest quality in the creation of Australia’s coinage.

Downies continues to expand, and, in a bid to accommodate our ever-growing workforce, we established spacious new headquarters in Melbourne’s east in 2012. Likewise, the growing nature of our retail business meant that we needed to find new premises for our Melbourne store. The perfect setting, our Melbourne retail outlet moved to Southbank in 2015 – one of the city’s most important shopping precincts.

Today and tomorrow – a global powerhouse

Downies proud history continues, with a third generation of the family having now entered the business. Australia’s largest coin and collectables dealer, we are also the world’s largest distributor of numismatic products for the Royal Australian Mint and Perth Mint.

Downies is the official representative in Australia for many international mints, including Britain’s Royal Mint, the Royal Canadian Mint, the Austrian Mint and the Mint of Japan.

We continue to work hard to cater for the needs of our customers. So whether you are buying a coin for a child’s birthday or sourcing an exclusive Australian rarity, we offer the same care and attention that Phil Downie did back when the company started in 1932.

Although we are proud to have achieved this major 85th anniversary milestone, we will never rest on our laurels. Indeed, Downies 85th anniversary celebrations will see us reaffirm our long-term commitment to providing the best range, service and value in the industry. We hope you will join us in the celebrations!

Downies maintains a strong retail presence in Melbourne, with Downies Coins located in the CBD. A new specialist position has just been established for our Melbourne shop and, given that those who visit our website are knowledgeable in the field of numismatics, this is the perfect place to announce this. If you or someone you know might be interested in joining the Downies team, then you should read this message from our HR Department.

Our business is only as strong as our people…

At Downies, we understand the importance of having a strong team to look after our customers and our business. It’s why we’ve been a leader in Australian numismatics for over 80 years, and why we are Number One today.

Knowing that people are at the heart of our business, we’re looking for the right person to join our retail team in Melbourne as a Numismatic Dealer. Your brief will include looking after our customers seeking to sell or trade their collections, or collectors wishing to purchase from our extensive range of numismatic and other collectable material.

Our retail store is in the prestigious Southgate complex in the centre of Melbourne’s art precinct – just a few minutes’ walk from Flinders Street Station. A bright, modern store makes coming to work a pleasure, and you will have the rare chance to progress your career in a specialist market with real growth opportunities. In addition, when you work with Downies, you’re supported by our history and reputation, as well as access to the structure and resources of a large company.

If you would like to know more about what it’s like to work with Downies, visit our Careers Website – www.downiescareers.com – and submit your expression of interest in joining us as a Numismatic Dealer.

An advertisement for the upcoming Australian Coin Auctions sale 320 is featured in the October issue of Medal News Magazine. Check out our newly designed ACA website at www.downies.com/aca 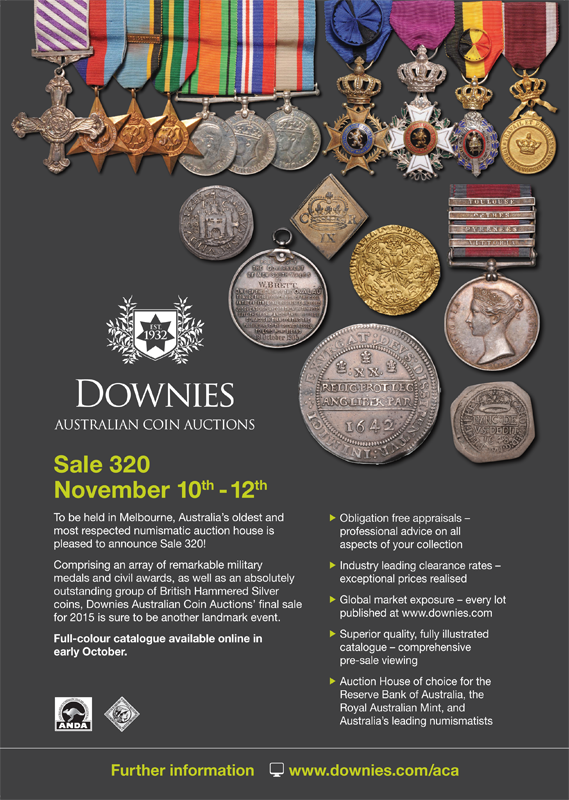 An advertisement for the upcoming Australian Coin Auctions sale 320 was featured in the September edition of Australasian Coin & Banknote Magazine. 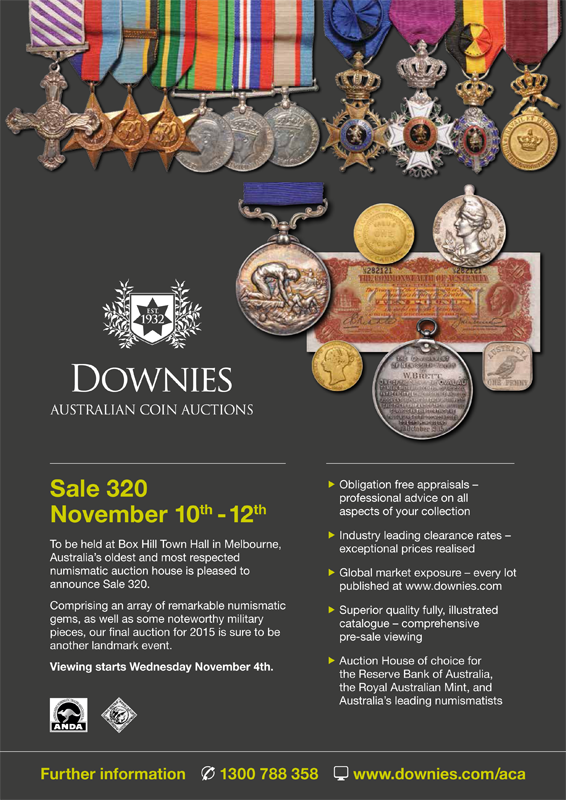