The 4th and second-last release in the ‘Famous Battles In History’ series see’s the famous Battle of Balaklava re-created. The series itself is dedicated to commemorating famous battles throughout history, with previous issues focusing on the battles of Hastings, Cannae and Thermopylae. All have been extremely beautifully designed coins effectively depicting their respective battles, with the latest release being no exception! 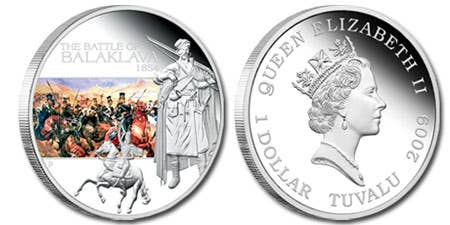 Fought on 25th October 1854 during the Crimean War, the bloody Battle of Balaklava was part of the Anglo-French-Turkish campaign to capture the port and fortress of Sevastopol, Russia’s principal naval base on the Black Sea. The 40.6mm Silver Proof bears a full-colour depiction – as painted by brilliant artist Richard Caton Woodville (1825-55) – of one of the most famous moments of the Battle of Balaklava – the ill-fated ‘Charge of the Light Brigade’, in which Lord Cardigan, after a misinterpreted order, led a 600-strong contingent of mounted British troops into the ‘valley of death’ against a huge Russian army. With over 110 British troops killed, and over 270 wounded, this battle went down in history as one of Britain’s most disastrous military defeats.

With the earlier coins in the series all selling out at phenomenal speed many collectors were left empty-handed and considering the previous sales and high demand this series has created, it would be safe to say that this is definitely a coin that is again set to attract massive interest in collectors, not only from Australia, but also from across the globe.

Man on the Moon Orbital

Celebrating landmark events in space exploration, the Perth Mint’s ‘Orbit and Beyond’ series has commanded attention of collector’s right round the globe. Starting back in 2007, the series has seen one coin released each year with an innovative “orbital” function that allows the reverse design to rotate around a central image of the planet earth. With the previous issues having highlighted the 50th Anniversary of Sputnik, the First man in Space and the First Space Walk, there was always a sneaking suspicion that humanity’s greatest technological triumph – putting a man on the moon – would feature in this spellbinding series, and the Perth Mint has not let us down!

Comprising 1oz of 99.9% pure silver, with a central core made of non-previous metal, this coin displays an utterly unique appearance - one suitably fitting for such a monumental occasion. Representing the ideal format to celebrate the 40th anniversary of such a crucial juncture in human history, the coin’s reverse portrays Apollo 11 during the different phases of its historic mission.

Combining the unique qualities of the coin and the importance of its historic theme will ensure massive demand for the 2009 $1 Man on the Moon Orbital 1oz Silver Proof, both in Australia and overseas. With most of the mintage destined for the international market, collectors would be wise to make the most of any opportunity to guarantee supply of this dramatic commemorative coin.

A spectacular start to a fantastic new series, to be issued progressively until May 2010, the Perth Mint has just released the 2010 50c Lionfish 1/2oz Siler Proof! A mesmerizing tribute to one of the nation’s most exotic marine inhabitant’s, this sensational new Australian legal tender coin is an essential acquisition for anyone enchanted by the mints incomparable full-colour expertise.

Portraying the truly majestic Lionfish in full colour glory, the reverse of the coin does well in highlighting such a beautiful Australian sea creature. The ideal candidate for the application of the Perth Mint’s state of the art full-colour minting technology, the Lionfish is distinguished by strong black and red bands, and very prominent dorsal and pectoral fins – all of which are superbly recreated upon the new crown-sized 36.60mm flan of this unique legal tender coin.

Housed within an official case with a numbered Certificate of Authenticity, as typical with Perth Mint releases, this coin also comes in a vividly illustrated outer box, that when placed with the outer boxes of the remaining four coins in the series, forms on complete, eye catching marine photo!

An outstanding opportunity to build a complete, attractive, exclusive coin collection in just a matter of months, you must not miss the crucial first element of the 2010 Australian Sea Life Series.