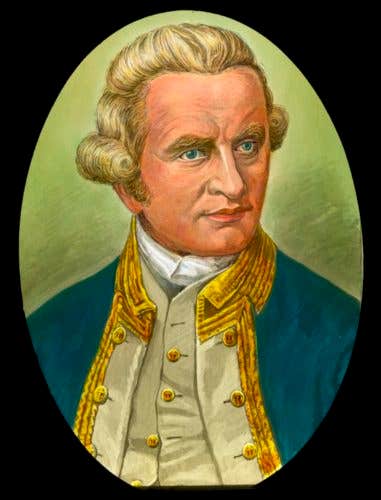 Born in October 1728, James Cook rose from humble beginnings to become ‘one of the greatest of Englishmen’. This is the story of his historic maiden voyage - and its legacy that would earn him a place in Australian history books.

The son of a farmhand

Although Cook came to prominence during the war between England and France for Canada, where his detailed charts played a key role in attaining victory, he was largely unknown when appointed to command the HMS Bark Endeavour in 1768. Cook’s journey on that sturdy converted collier was the first of three voyages that established his name as the pre-eminent explorer of his time. And yet, signifying that fate is the almost inevitable partner of greatness, Cook’s charting of Australia’s east coast during the first of those voyages occurred almost by accident!

The first glimpse of Australia

Undertaken at the behest of the Royal Society, Cook’s expedition to the Pacific in 1768 was to observe the stars on King George III Island (Tahiti), with the stated object of the mission to scrutinise the transit of Venus. However, Cook also received secret orders from the admiralty to find the fabled Great South Land, and to take possession in the name of the King.

After charting New Zealand and discovering that it was not part of a huge continent, and with just a few months’ worth of provisions remaining, Cook set sail for home. The Endeavour was in poor condition, so Cook sailed her along a coastline, where it was not as rough as the open sea – Australia’s eastern coastline. He then planned to sail on to the East Indies, where the necessary repairs to his ship could have been undertaken.

New South Wales gets its name

Aiming at Van Diemen’s Land, winds pushed the Endeavour north, and on 20 April 1770, land was sighted at what is now known as Point Hicks. Cook continued north, mapping the coast as he went, with the first landing at Botany Bay. The expedition continued along the coast until encountering the Great Barrier Reef. Striking the reef, the ship was repaired in the spot where Cooktown now stands. Sailing from Cooktown to Cape York, Cook and his party landed on a small island, now known as Possession Island, and it was there that Cook claimed the eastern coast for Britain, naming the new territory New South Wales.

The pre-eminent explorer of his time

The ‘Discoverer of the Australian east coast’, charting 2,000 miles of the continent on that original voyage, Cook’s role in Australian history cannot be overstated. His following expeditions – he was dispatched by the admiralty with the Adventure and the Resolution in 1772 to prove the existence of the southern continent once and for all – reinforced his legend. He is remembered today as a courageous, calm, driven individual.

It was on one of those subsequent voyages that Cook met his tragically ironic fate. Always keen to engender good relations with indigenous populations, and usually successful, Cook was speared and stabbed in the back in 1779 whilst trying to prevent his crew from opening fire on the people of an Hawaiian island. He was 51 years of age.