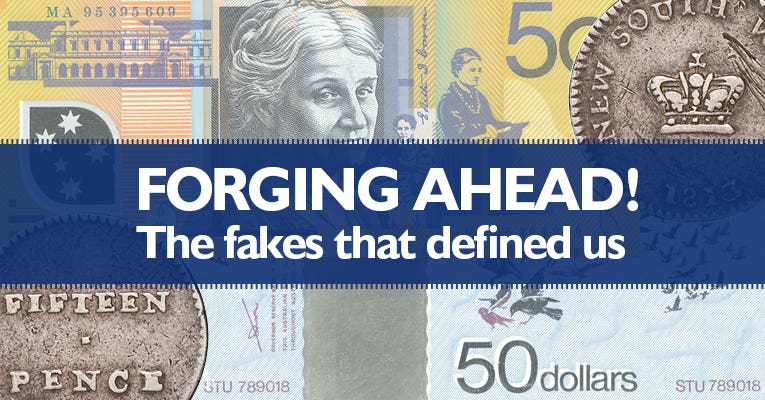 Things were very different in 1812.

Australia as we know it now didn’t exist yet. It was a British colony, filled largely with convicts, soldiers and their wives. While it was originally assumed that large amounts of currency wouldn’t be needed to run these colonies effectively – after all, officially a penal colony with a largely convict population, who would need it? – in the colony of New South Wales, Governor Lachlan Macquarie faced a problem. He had run out of money.

If there was one thing Macquarie was good at, it was finding talent and exploiting it. Famous for giving former or pardoned convicts roles in government once they had done their time, he again made an unusual – but inspired – decision. He imported 40,000 Spanish 8 Reales, and enlisted none other than a convicted forger, convict William Henshall, to help.

Born in England in 1770, William Henshall was a Plater and Cutler by trade, and a married father of seven by the age of 35. The knowledge he had gained through his career had no doubt influenced his decision to enter the world of forgery. Able to make his own dies, which set him apart from peers, he could produce relatively high-quality counterfeit coins. But it was forgery of the 1804 Bank of England Silver Dollar that would prove his undoing.

Sentenced to seven years ‘transportation beyond the seas’ to the other side of the world, Henshall’s life took a drastic turn. Despite handing in his tools and co-operating with authorities at every opportunity, his sentence remained unchanged. What’s worse, when he requested to have his family transported with him, he was told that only his wife Nancy and their three youngest would be allowed to make the journey. An impossible choice, Nancy elected to remain in England with all of her children. Henshall made the journey alone.

But in Australia, he would make numismatic history.

While the history books tell us that the practice of cutting out the centre of coins to create two new pieces of currency from one wasn’t entirely original, Macquarie’s idea did the trick. Despite having to build his own machinery, and after working for four times the projected duration of the project, Henshall managed to cut out the centre of those 8 Reales coins, creating what we now know as the Holey Dollar and Dump. Australia’s first currency was born – made by a convicted forger.

Miniskirts and go-go boots were in vogue, the Vietnam War featured prominently in news headlines, and in Australia, decimal currency had just been introduced. With this change came a whole suite of new paper banknotes – banknotes ripe for the forging.

The names Adams, Code, Mutton and Papworth may not ring any bells, but it was in 1966 that this unlikely team of disgruntled Melbourne residents would create a highly successful forging enterprise that would give authorities a serious headache.

Jeffrey Mutton owned a failing milk bar. Disillusioned, he had hatched a daring scheme to level the score. Calling upon the talents of his associates Dale Code, a tailor; Ronald Adam, a photographer and engraver; and Francis Papworth, an artist, Mutton was able to bring his plan into fruition. Enlisting notorious career criminal Robert ‘Bertie’ Kidd to procure the start-up capital, the team used nothing more sophisticated than a standard offset printer and readily-available Strathbond No. 8 paper to create their counterfeit $10 notes.

They looked good, and to the unsuspecting eye, they were extremely convincing. However, it was the feel of the notes that was their Achilles heel. Mutton’s then 18-year-old son Ken, a bank teller, had been the guinea pig, and later told reporter Adam Shand that they just didn’t feel right. “They were waxy to the touch and tore too easily,” notes Ken, who was adamantly opposed to the scheme as soon as it came to light.

The writing was on the wall. When Mutton’s sister-in-law Moira unwittingly took one of the fake $10 notes to the shops, the cashier smelled a rat, followed Moira to her car, took down her registration details and handed them to the police. It was game over for Mutton’s gang.

But it was the start of something amazing for Australian currency.

To the then Governor of the Reserve Bank, H.C. ‘Nugget’ Coombs, this was a sign that something had to be done. He commissioned the CSIRO to come up with an alternative material from which new notes could be made – and 22 years later, Australia’s first polymer note was released into circulation. A $10 note, of course!

Tomorrow, we’ll see the first of a new wave of polymer $10 notes hit banks and tills across the country.

Armed with a range of new security and design features, this splendid note represents the next big step in Australia’s currency history. But would we have reached this level of sophistication without the efforts of forgers along the way?