Set to ship from the printers in the first week of December, be one of the first to receive the guide that the dealers use! 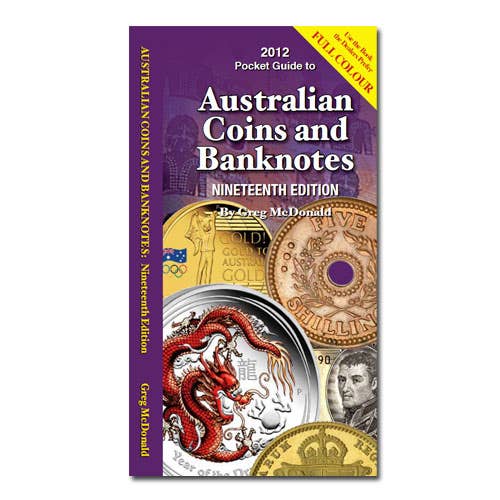 Undoubtedly the most comprehensive coin and banknote handbook used in Australian Numismatics – the 2012 McDonald’s Guide to Australian Coins & Banknotes 19th Edition is a vital text for every collector. Providing an accurate and informative overview on every coin and banknote issued in Australia from 1787 – 2012, the 2012 McDonald Pocket Book is a complete, full-colour guide providing distinguished and up-to-date valuations for all your collecting needs.

With over 450 pages detailing the magnitude of numismatics throughout Australia – head on over to Downies.com to secure one of the easiest and most affordable ways to value your collection!

In celebration of the 60th anniversary of the signing of the ANZUS Defence Alliance, today Mr Barack Obama will touch down in Australia for the first time as being President. After three set-backs, President Obama’s Australian visit has been a long awaited one, and, as the strongest ally and greatest friend of the Australian nation, will be welcomed with open arms.

With 2011 also marking the 10th Anniversary of the devastation witnessed by the American nation on September 11 2001, President Obama’s visit to the land down under is sure to tighten the already secure ties between Australia and the United States. With Mr Obama’s itinerary still under wraps, it has however, been announced that he will address the Australian Parliament on November 17 2011. 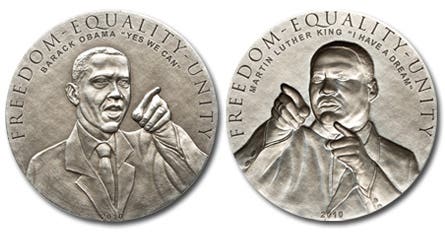 Driven by trying to achieve freedom, justice and equality throughout the United States, Noble Prize winner and icon of the American nation, President Obama is one of the most influential political figures across the globe. Issued in celebration of powerful American legends – the 2010 $5 Obama & King Antique Silver BU Pair is still available at Downies. With each legal tender issue brilliantly designed and flawlessly struck to pay homage to two of the greatest instigators for change in the history of the United States – President Obama and civil rights activist Martin Luther King – head on over to Downies.com for your piece of great American history. 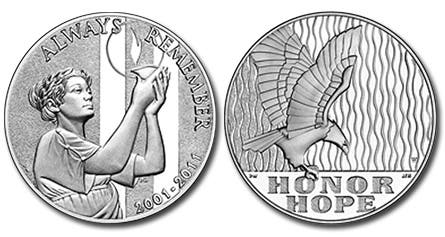 In the wake of perhaps America’s greatest triumph in bringing the leader of al-Qaeda, Osama Bin Laden to justice, a decade after the merciless attacks that saw 2,974 people from over 90 countries lose their lives –the 2011 September 11 Silver Proof Commemorative Medal is also still available at Downies. With all proceeds donated to the National September 11 Memorial & Museum, each commemorative medal is an official tribute to the immense loss that occurred on that fateful day.

A culturally combined issue, the Perth Mint has intricately united elements of Beijing and Australia – delivering one of the most popular 2-coin sets of the year. 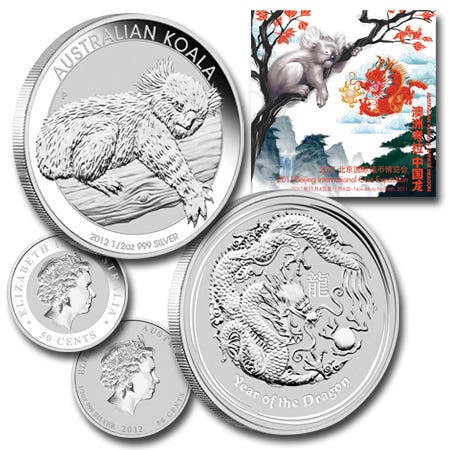 Struck from ½ ounce of .999 pure silver, each coin has been endorsed as official Australian Legal Tender and is fittingly presented within an illustrated envelope. Housing the signature Perth Mint Year of the Dragon coin issued for the highly anticipated arrival of 2012, the second coin pays tribute to an Australian Koala asleep in a eucalyptus tree.

With a tiny global mintage of just 2,888 sets, of which nearly two thirds walked out the doors in Beijing, we are currently trying to secure an allocation directly from the mint. For those interested in trying to attain what has been one of the hottest 2-coin releases of 2011, stay tuned to www.downies.com for further information on our allocations! 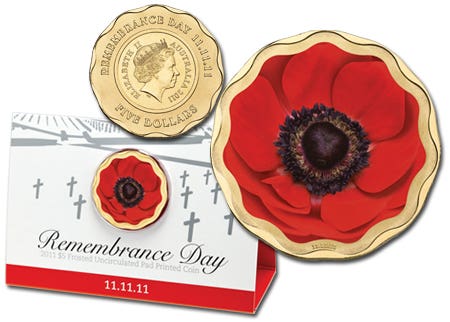 93 years on from the brutality and devastation which ultimately changed the fate of the globe, today we remember those who have lost their lives in the front line of war and armed conflicts.

Observed on November 11 throughout the Commonwealth nations, in 1918 at the “11th hour of the 11th day of the 11th month” Germany signed the Armistice – a formal end to the extensive bloodshed that was World War I.

A significant date which sees Remembrance Day fall on 11.11.11, the Royal Australian Mint has issued a scalloped red poppy Uncirculated Coin in the honour of each of our fallen heroes. A symbol of hope and renewal following the ‘sacrifice of shed blood’, the poppy was the first plant to blossom throughout the war torn battlefields.

A fitting tribute to the ‘war to end all wars’, the 2011 $5 Remembrance Day Unc is now available at Downies.com.

105,979 roaring fans, 23 thoroughbred horses, 3200 metres and a photo finish to determine the champion, the 2011 Emirates Melbourne Cup lived up to its reputation as the ‘race that stops the nation’. 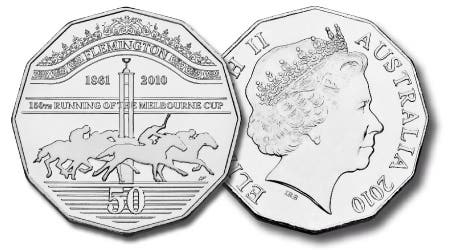 The closest finish in the events 151 year history, after two painstakingly long minutes, captured only by a photo finish, Dunaden was crowned the winner of the 2011 Cup. One of the most exciting finishes seen throughout Australia’s greatest horse race, a modest Christophe Lemaire spared a thought for Australia’s Craig Williams, who just 24 hours prior had been charged with careless riding in turn handing Lemaire the winning reigns.

A truly spectacular event that for 151 years has commanded attention not only throughout the Australian nation but also across the globe! In celebration of the 150th anniversary of this notorious event, celebrated last year, the Royal Australian Mint issued the 2010 50c 150th Anniversary of Melbourne Cup Cu/Ni Unc. Never issued into circulation, the 150 year commemorative is available now at Downies.com.

Just hours after the highly anticipated arrival of HM Queen Elizabeth II in Australia for the Commonwealth Heads of Government meeting (CHOGM) held in Perth – Downies is pleased to announce the newest Royal-themed issue from the Royal Australian Mint - the 2011 $5 Queen’s Visit Unc. As seen on TV, this truly unique tribute to Her Majesty features 16 St Edward’s Crowns – symbolising each of the Queen’s visits ‘down under’. Created by Mr Wojciech Pietranik, a renowned designer behind the 2000 Sydney Olympic Games medals, this 38.74mm coin has been approved by the Queen herself!

A fitting issue to mark this official event – when you purchase your 2011 $5 Queen’s Visit Unc at Downies, we are delighted to provide you with a FREE 2011 $1 CHOGM BU Coin!

The perfect pair issued in celebration of this bi-yearly event – be sure to visit to secure your next Royal Family tribute!

Celebrating the discovery of the hologram, initially created to improve the resolution of an electron microscope – 64 years on, the hologram continues to captivate consumers with its use in art, marketing, science, entertainment, engineering, data storage and security devices. 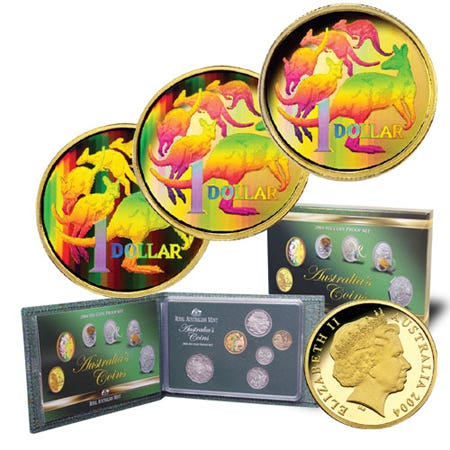 Using a technique that captures light from a laser to record an image of a desired object onto a photographic plate, enabling the image to appear three dimensional, holograms are most commonly used in a bid to win the battle against banknote counterfeiting across the globe.

2001 bore witness to the first hologram coin to be issued throughout Australia. Released to celebrate Australia’s 100 years of federation, initially issued for $79.50, this iconic coin now retails for an incredible $675.00! 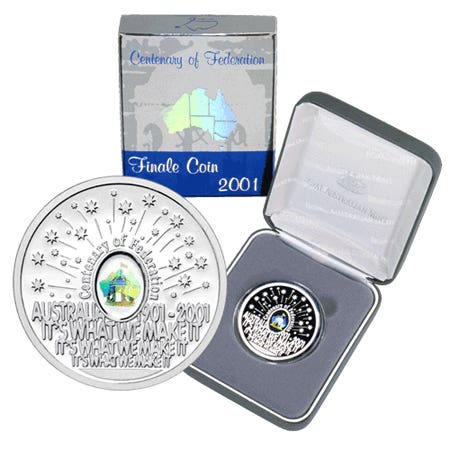 With an unprecedented demand for hologram coins, 2004 saw the Royal Australian Mint and the Commonwealth Scientific and Industrial Research Organisation (CSIRO) combine technology with numismatics to create the world’s first holographic coin that portrayed the original designs of Australia’s iconic $1 circulating coin. Enabling the five kangaroos to appear as multi-coloured holograms creating the impression of colour and movement, this feature coin was issued in the Royal Australian Mint’s 2004 Proof Year Set.

With a small number of both of these innovative coins available to purchase online – head over to www.downies.com for further information.

Dead, wounded and held captive – The Battle of Tobruk

8 months, 559 dead, 2450 wounded and 941 taken prisoner, in 1941 Australian troops endured intense bombing and constant threat of attack from both the German and Italian forces. Fighting through incredible heat, cold, thirst and hunger with unmistakable bravery, determination and passion - 2011 marks the 70th anniversary of the Battle of Tobruk.
Commemorating one of the first major battles that Australia fought in World War II, The Rats of Tobruk 1941 Special Exhibition is on display in the Canberra Memorial until November 16 2011.

One of the most prestigious pieces of militaria to be offered by Downies – this genuine medal group awarded to Sapper Robert Charles Boulger – an Australian Serviceman who not only served at Tobruk but also managed to escape captivity in Europe in 1943. Comprised of ‘The Rats of Tobruk Medal’ received as testimony to Boulger’s service, the set also includes the 1939-45 Star, Africa Star, Defence Medal, War Medal and Australian Service Medal. Accompanied by an array of personal memorabilia, this striking set allows the rare opportunity for a collector to connect with one of Australia’s true hero’s. 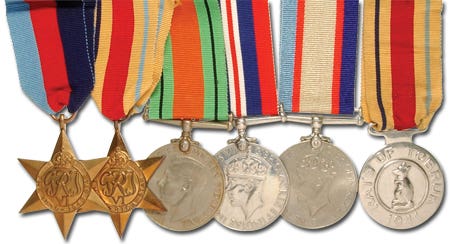 The second release in the Perth Mint's Famous Battles collection, this full colour reverse depicts the Australian soldiers at the siege of Tobruk. Struck to Proof quality from 1oz of .999 fine silver, this legal tender, 40.60mm release is a stunning tribute to the legendary Battle of Tobruk. 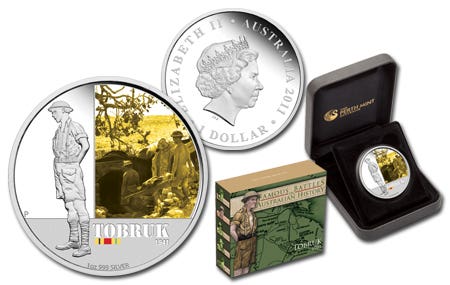 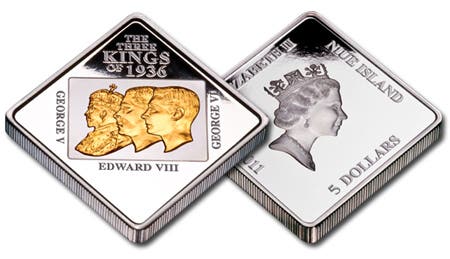 The final time that the Kingdom of England experienced three changes in power within the one year, 1553 saw the passing of Edward VI which lead to a series of events that ultimately lead to death, betrayal and once again the shifting of power throughout the monarchy.

Initiated by the passing of King Edward VI, England’s throne was handed down to Lady Jane Grey, a cousin of Mary. In a bid to continue Protestantism throughout the nation, in his final days King Edward VI questioned Mary’s right to the throne, passing it instead to her cousin. Despite the obvious public support for Mary to take the throne, Lady Jane ruled England for nine days, however was over thrown by Mary, who once in power commanded the execution of Lady Jane to ensure that her power remained.

Queen Mary I reigned England for five years, however suffered from an early death in 1558.

In celebration of the 75th anniversary of the Three Kings of 1936 – England’s latest occurrence of welcoming three separate Kings to the throne within one iconic year comes the Niue 2011 $5 Three Kings of 1936 Silver Proof. Available for purchase from www.downies.com, this eye-catching commemorative retails for $199.00.

1483 saw the third occurrence within the British Monarchy where three kings – Edward IV, Edward V and Richard III, ruled the throne within the one year. Beginning with his second reign in 1471, King Edward IV controlled the British throne until his death in 1483. Upon his death, King Edward IV left the throne to his eldest son Prince Edward. Ascending to the throne at just 13 years old, King Edward V was aided by his uncle Richard Duke of Gloucester as he was too young to rule the monarchy alone. Ruling for just two months, King Edward V was transferred to the Tower of London to await his coronation, along with his younger brother Prince Richard.

Celebrating the iconic year of 1936 – The final time that the British Monarchy experienced three different rulers within the one calendar year, the Niue 2011 Three Kings of 1936 Silver Proof is available for purchase at www.downies.com.