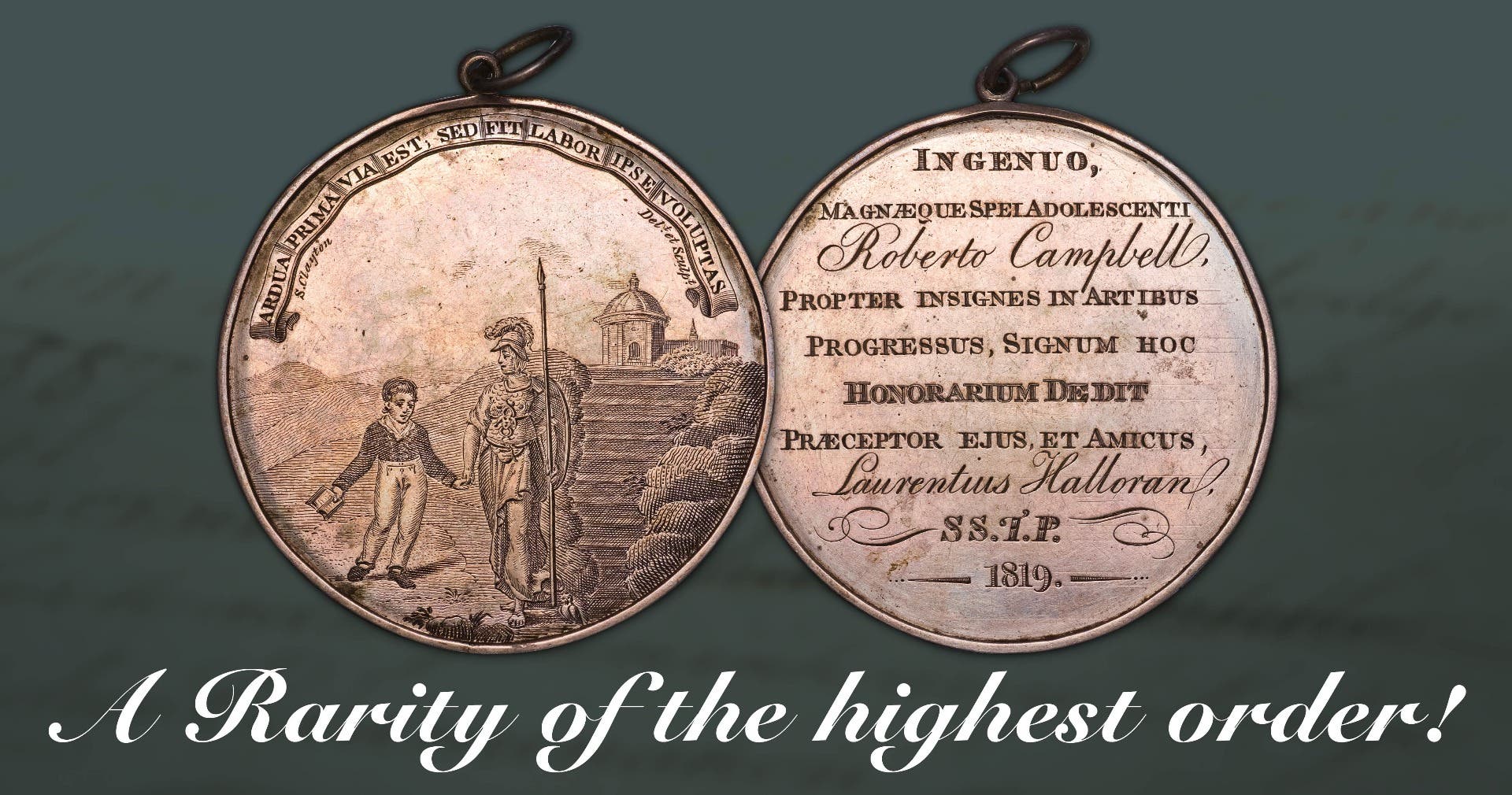 One of Australia’s earliest works of medallic art, and a crucial piece of early Australiana, the 1819 Sydney Halloran School Prize Silver Medal has an amazing tale to tell – beginning with the scarcely believable life of the man behind the medal, Laurence Hynes Halloran (1765-1831). 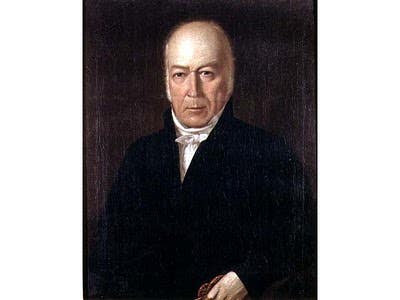 Orphaned at a young age, Halloran joined the Royal Navy in 1780, but deserted two and a half years later after brutally stabbing another sailor to death with a sword. He was acquitted of the charge of murder at the Exeter Assizes in 1783, and then, somewhat perversely, turned his hand to the role of educator. As it happens, he successfully ran private schools for more than a decade thereafter, before his school at Alphington, near Exeter, was closed due to insolvency. It would not be the first time that Halloran would experience serious financial difficulties.

Posing as a chaplain, which was another intriguing theme underpinning his life, Halloran rejoined the Royal Navy in 1798, serving as secretary to Lord Northesk, third in command under Admiral Horatio Nelson. Halloran was present at the famous Battle of Trafalgar in 1805, serving upon the Britannia during Nelson’s famous victory against the forces of Napoleon Bonaparte. He then set off for South Africa, being appointed chaplain to the military forces at the Cape of Good Hope. Although this new endeavour started well, he fell out with the commander of the colonial military. Resigning his commission in protest, the end of his African sojourn came when he was heavily fined and banished from the colony for defamatory libel, following the publication of a satire on ‘South African Characteristics’.

Halloran found life difficult when he returned to England from South Africa, and struggled to find employment. As a result, he turned to forging official documents in a bid to continue his bogus career as a chaplain. Having been found in possession of ‘copper plate for making impressions of Deacons’ and Priests’ orders’, he was convicted of forgery, and sentenced to seven years penal servitude in the colony of New South Wales.

Arriving in Sydney upon the transport Baring in June 1819, Halloran discovered that an old friend from South Africa, John Thomas Campbell, was the Vice-Regal Secretary. Exploiting the connection, Halloran had Campbell recommend him to Governor Lachlan Macquarie, who almost immediately issued Halloran a ‘ticket of leave’. It was also Macquarie who played a key role in helping Halloran, in 1819, establish a school – known at the time as ‘Dr Halloran’s Establishment’.

The forefather of Sydney Grammar School, today one of Australia’s leading private schools, Halloran’s establishment was very successful. Indeed, Governor Macquarie stated at the time that Halloran was ‘the best and most admired instructor of youth in the Colony’. Alas, Halloran’s unrelenting penchant for writing libellous material saw him constantly in trouble with the law. This led to financial problems, and although he moved the premises of the school frequently, in an attempt to avoid his creditors, Halloran was jailed for debt several times in the 1820s. Governor Darling appointed Halloran as Sydney coroner in 1828, but, true to form, he lost his position after threatening to publish defamatory material about the Sydney archdeacon!

The birth of the Silver Medal

Whilst headmaster of the school, Halloran had prize medals created from 1819 until at least 1826. From the first year of issue, the 1819 Sydney Halloran School Prize Silver Medal was awarded to Robert Campbell – a man who was ultimately active in politics, and part of the successful drive to end convict transportation. Recognised as one of Australia’s earliest examples of medallic art, the medal was the work of Samuel Clayton – another remarkable figure in this amazing tale of early Australia!

Like Halloran, Clayton was both born in Ireland and transported to the colony as a convicted forger. To the surprise of his peers in Dublin, where he was a highly respected citizen, an admired engraver and an upstanding Freemason, Clayton was sentenced to seven years penal servitude for producing counterfeit revenue stamps in a large-scale fraud operation. Arriving in Sydney in December 1816, he was given a conditional pardon in January 1818, and set about establishing a career as a painter and engraver.

Even before he was officially pardoned, Clayton had carved his name into Australian history by creating the printing plates for Australia’s first banknotes – issued by Australia’s first bank, the Bank of New South Wales, in 1817. Interestingly, he was also the founder of the first regular Freemason lodge in the colony, and is therefore known as Australia’s ‘Father of Freemasonry’!

Known as the finest silversmith in the colony in the years after his arrival from Ireland, he also created the prize medals for Laurence Halloran’s school. As you will see from the image above, ‘S. Clayton’ is emblazoned upon the imposing 73mm diameter flan of the 1819 Sydney Halloran School Prize Silver Medal awarded to Robert Campbell.

Underpinned by such a remarkable history, combined with both breathtaking rarity, immense beauty and the connection with one of Australia’s most prestigious schools, the 1819 Sydney Halloran School Prize Silver Medal is a crucial artefact from the earliest days of modern Australia.

The 1819 Sydney Halloran School Prize Silver Medal is featured in Downies' Rarities catalogue! For more images of the medal, click here to view it on our website.

The image of Laurence Hynes Halloran above is courtesy of the State Library of New South Wales ML 1057 from a painting by Augustus Earle, c. 1825.