It has come as no surprise that just a week after the Saltwater Crocodile 1oz Silver Proof was released, it has sold out at Downies! As Downies had a large allocation as official distributor for the Perth Mint it illustrates the sheer popularity and demand the coin has generated.

As with the previous releases in the Deadly and Dangerous series, the Red Back, Blue Ring Octopus and Great White have all run a similar course - with allocations selling fast after initial release dates. It further shows what a stunning and glorious series this has been!

Other dealers have also seen similar results with most already, or close to, selling out. 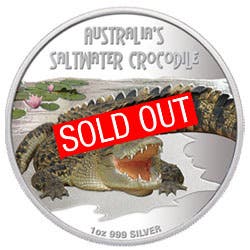