But what may appear at first glance to be just a plastic bank note - albeit a good-looking one! - can lay claim to far more than initially meets the eye. With a concept design by acclaimed Melbourne designer Garry Emery and his team, we take a look at some of the note’s innovative new features below.

Images courtesy of the Reserve Bank of Australia.

There’s no doubt about it, banknote designers face a pretty monumental task. While notes obviously need to be difficult to counterfeit, they’re also a piece of design that will become inextricably tied to the national identity of their country of origin, so looks are also just as important. Even the RBA recommends that any security features be “integrated effectively into the banknote without interfering with the aesthetics”! Fortunately, the new $10 has plenty to look at. 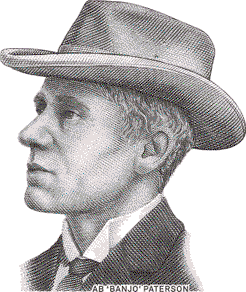 Taking pride of place on the note’s obverse, the portrait of Australian poet A.B. ‘Banjo’ Paterson immediately catches the eye. We’ve seen him before, of course – the original standard $10 Polymer design also bears his portrait – but this image is bolder. Based on an original photograph of Paterson from 1900, following his return from the Boer War, the portrait sits proudly in grey, rather than blue as before, ensuring that it stands out and does not blend into the background.

The theme of Paterson is deftly echoed across multiple design features, in multiple nods to the legendary author who penned The Man from Snowy River.

What better way to pay homage to a literary legend than with the nib of a pen? One of the small, understated symbols placed on the transparent window, the nib represents Paterson’s tremendous contribution to Australian culture. 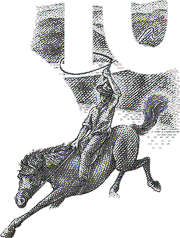 Adding further flavour to the Paterson homage, the depiction of a horseman just below the note’s denomination, is taken from the era of Paterson’s writing, and is most likely a nod to his most famous work, The Man from Snowy River.

Iconic Australian fauna, this stylised depiction of the ubiquitous ‘cocky’ sits in the transparent window.

Now, some iconic flora! Dotted around the transparent window, the designer’s impression of bramble wattle adds colour and interest.

Ever since we blazed the polymer trail in the 1970s, with our CSIRO scientists working tirelessly to find an alternative to paper money, preventing forgery has been a serious priority. Like its $5 cousin released last year, the new $10 has security features in spades, but be warned: blink, and you may well miss them!

In the top left-hand corner of the note’s obverse sits an iridescent bird. Tilt the note, and the bird’s colour changes: a feature that is very difficult to replicate!

In the transparent window, just below the nib, the coloured outline of a cockatoo is visible. But if you tilt the note, the outline of the bird changes, giving the appearance of flight. Once again difficult to replicate, this security feature provides a serious boost against counterfeiters.

When you first receive a brand new $10 polymer note, make sure you not only tilt it vertically, but horizontally, and watch the image of the homestead at the bottom of the transparent window. Another savvy security feature, the ‘10’ appears to flip around so that at some angles, it appears in reverse! 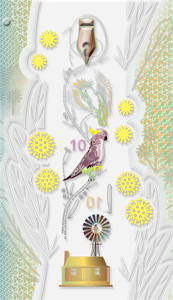 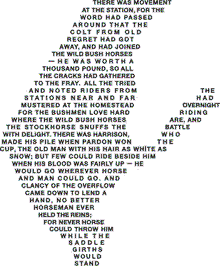 Definitely falling within the ‘blink and you’ll miss it’ category is the assortment of microprint, deftly hidden across sections of the note. Including excerpts from The Man from Snowy River (another nod to the Banjo Paterson theme) and the words ‘ten dollars,’ this microprint is very, very hard to see. Can you find it?

Just when you thought you had seen it all, a UV light will display this image of a cockatoo and wattle branch, printed in fluorescent ink.

“My 12 year old son Connor is blind,” she wrote. “That means I’m always fighting for the little things that will give him the same chance as everyone else. Things like having the confidence and independence to use money like everyone else - and without being ripped off!”*

With the petition gathering over 50,000 signatures and a huge amount of momentum, it became a contributing factor to the RBA’s decision to add a tactile feature for the vision impaired to the 2016 $5 note – a feature that has also been employed upon the new $10.

What makes our tactile feature different to the rest of the mob?

Other countries have had difficulty preventing tactile features on their banknotes from becoming squashed over time and losing their effectiveness, according to the ABC. The RBA’s technology has reportedly solved that problem, allowing the feature to be printed as part of the note, and experiencing the same longevity as the note itself.

Make no mistake, the RBA’s new $10 is a serious step forward for Australian currency and Australian numismatics. Keep an eye out for it today, and for more information, jump aboard Downies.com, or visit the Reserve Bank of Australia website, https://banknotes.rba.gov.au!